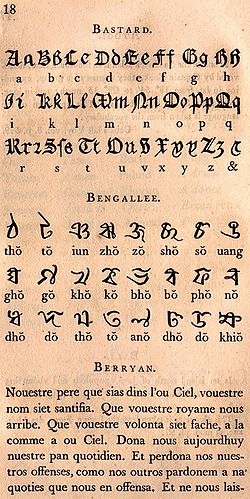 Bastarda (or bastard or lettre bâtarde in French) was a Gothic script used in France and Germany during the 14th and 15th centuries. These scripts were designed to provide a simplified letter that was appropriate for the copying of books or documents of minor value or importance.

The early printers produced regional versions in type which were used especially to print texts in the vernacular languages, more rarely for Latin texts. The earliest bastarda was produced by Gutenberg in 1454/1455. The main variety was the one used in France, which was also found in Geneva, Antwerp and London. Another local variety was found in the Netherlands; Caxton's first types were a rather poor copy of this. The French lettre bâtarde passed out of use by the mid-16th century but the German variety developed into the national Fraktur type which remained in use until the mid-twentieth century.