From Wiktenauer
(Redirected from Armored fencing)
Jump to navigation Jump to search
Change propagation updates are pending (10 jobs estimated) and it is recommended to wait with modifications to a category until the process has been finalized to prevent intermediary interruptions or contradictory specifications. 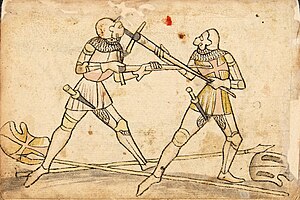 Harnischfechten, or "armoured fighting", depicts fighting in protective gear, most specifically plate armour. The increased defensive capability of a man clad in "full harnisse" (a full suit of plate armour) caused the use of the sword to be drastically changed. While slashing attacks were still moderately effective against infantry wearing half-plate armor, cutting and slicing attacks against an opponent wearing plate armour were almost entirely ineffective in providing any sort of slashing wound as the sword simply could not cut through the steel. Instead, the energy of the cut becomes essentially pure concussive energy. The later hardened plate armours, complete with ridges and roping, actually posed quite a threat against the careless attacker. It is considered possible for strong blows of the sword against plate armour to actually damage the blade of the sword, potentially rendering it much less effective at cutting and producing only a concussive effect against the armoured opponent.

To overcome this problem, swords began to be used primarily for thrusting. The weapon was used in the half-sword, with one or both hands on the blade. This increased the accuracy and strength of thrusts and provided more leverage for Ringen am Schwert or "Wrestling at/with the sword". This technique combines the use of the sword with wrestling, providing opportunities to trip, disarm, break, or throw an opponent and place them in a less offensively and defensively capable position. During half-swording, the entirety of the sword works as a weapon, including the pommel and crossguard which function as a mace as shown in the Mordstreich.

The following 22 pages are in this category, out of 22 total.