From Wiktenauer
Revision as of 00:23, 21 September 2012 by Michael Chidester (talk | contribs) (16 revisions)
(diff) ← Older revision | Latest revision (diff) | Newer revision → (diff)
Jump to navigation Jump to search
This article, or parts of this article, has been imported from the Wikipedia page Historical European Martial Arts. 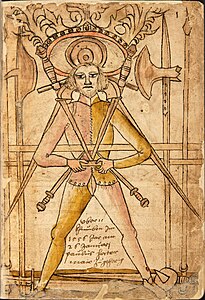 Antiquity to High Middle Ages (before 1350)

There are no known manuals predating the Late Middle Ages (except for fragmentary instructions on Greek wrestling), although Ancient and Medieval literature (e.g. Icelandic sagas and Middle High German epics) record specific martial deeds and military knowledge; in addition, historical artwork depicts combat and weaponry (e.g. the Bayeux tapestry, the Morgan Bible). Some researchers have attempted to reconstruct older fighting methods such as Pankration and gladiator|gladiatorial combat by reference to these sources and practical experimentation, though such recreations necessarily remain more speculative than those based on actual instructions.

The so-called MS I.33 (also known as the Walpurgis or Tower Fechtbuch), dated to between ca. 1290 (by Alphonse Lhotsky) and the early to mid-14th century (by R. Leng, of the University of Würzburg), is the oldest surviving fechtbuch, teaching sword and buckler combat.

The central figure of late Medieval martial arts, at least in Germany, is Johannes Liechtenauer. Though no manuscript written by him is known to survive, his teachings were first recorded in the late 14th century MS 3227a. From the 15th century into the 17th, numerous Fechtbücher (German "fencing-books") were produced, of which some 55 are extant; a great many of these describe methods descended from Liechtenauer's.

Normally, several modes of combat were taught alongside one another, typically unarmed grappling (Kampfringen or abrazare), dagger (Degen or daga, often of the rondel variety), long knife (Messer) or Dussack, half- or quarterstaff, pole arms, longsword (langes Schwert, spada longa, spadone), and combat in plate armour (Harnischfechten or armazare), both on foot and on horseback. Some Fechtbücher have sections on dueling shields (Stechschild), special weapons used only in judicial duels. The long sword had a position of honour among these disciplines, and sometimes Historical European Swordsmanship (HES) is used to refer to swordsmanship techniques specifically.

Important 15th century German fencing masters include Sigmund Ringeck, Peter von Danzig, Hans Talhoffer and Paulus Kal, all of whom taught the teachings of Liechtenauer. From the late 15th century, there were "brotherhoods" of fencers (Fechtbruderschaften), most notably the Marx brothers (attested 1474) and the Federfechter.

An early Burgundian French treatise is Le jeu de la hache ("The Play of the Axe") of ca. 1400.

Three early (before Silver) natively English swordplay texts exist, all very obscure and of uncertain date; they are generally thought to belong to the latter half of the 15th century. 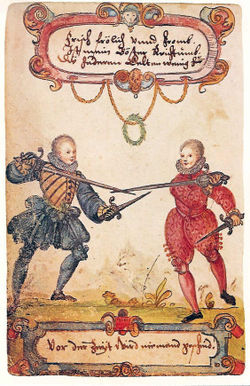 In the 16th century, compendia of older Fechtbücher techniques were produced, some of them printed, notably by Paulus Hector Mair (in the 1540s) and by Joachim Meyer (in the 1570s).

In the 16th century German fencing had developed sportive tendencies. The treatises of Paulus Hector Mair and Joachim Meyer derived from the teachings of the earlier centuries within the Liechtenauer tradition, but with new and distinctive characteristics. The printed fechtbuch of Jacob Sutor (1612) is one of the last in the German tradition.

The Italian school is continued by the Dardi school, with masters such as Antonio Manciolino and Achille Marozzo. From the late 16th century, Italian rapier fencing attained considerable popularity all over Europe, notably with the treatise by Salvator Fabris (1606). 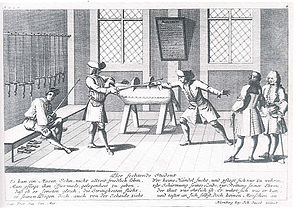 The martial arts of the post-Renaissance period can be divided roughly into civilian duelling/self defence, sporting and military applications. There is considerable overlap between these classifications, however, in that some systems fit into more than one category.

Examples of martial arts practiced primarily by the military during this period include bayonet fencing, sabre fencing and the use of the lance by cavalry soldiers.

The duelling and self-defence categories include smallsword and late styles of rapier fencing, walking-stick fighting (including Irish bata or shillelagh, French la canne and English singlestick or cane) and Bartitsu (an early hybrid of Eastern and Western schools popularized at the turn of the 20th century). In regional areas of Europe, two-handed stick and staff fighting methods had an important self defence purpose, as they had for centuries previously.

European combat sports of the 1700s to early 1900s include boxing, numerous regional forms of wrestling, the French kickboxing art of Savate, quarterstaff and singlestick fencing as well as two-handed longstick or greatstick fighting methods such as Jogo do Pau, Juego del Palo, Makila, Bâton français and Bastone Siciliano.

Some existing forms of European martial arts and combat sports can traced to direct teacher-student lineages from the 19th century. Notable examples include the French kickboxing art of savate, the methods of la canne and Bâton français, Portuguese Jogo do Pau, Italian Paranza or Bastone Siciliano and some styles of Canarian Juego del Palo. In the 19th and early 20th centuries, the greatstick (pau/bâton/bastone) was employed by some Portuguese, French and Italian military academies as a method of exercise, recreation and as preparation for bayonet training.

Direct continuity between the 18th and 19th centuries is often more difficult to establish, but can be assumed by necessity: not least because the terminology of modern fencing is directly based on that introduced by Henry de Sainct-Didier in 1573. Likewise, academic fencing has a continuous tradition from the 16th century to the present day.

In the late 19th century, all across Europe, there was an explosion of interest in historical fighting arts. In Germany, Karl Wassmannsdorf conducted research on the German school that is still referred to today and Gustav Hergsell reprinted three of Hans Talhoffer's manuals. In France there was the work of the Academie D'Armes circa 1880-1914.

In England, Egerton Castle and Alfred Hutton wrote pioneering books on the history of swordsmanship, and Cyril Matthey republished Silver's Paradoxes of Defence and Brief Instructions. All three took an interest in the practical side of interpretation, giving public demonstrations of reconstructed techniques. Italy had Jacopo Gelli and Francesco Novati, who published a facsimile of the "Flos Duellatorum" of Fiore dei Liberi, and Giuseppe Cerri, whose book on the Bastone drew inspiration from the two-handed sword of Achille Marozzo. Spain had Baron Leguina, whose bibliography of Spanish swordsmanship is still a standard reference today.

Throughout the 20th century a small number of researchers, principally academics with access to some of the sources continued exploring the field of historical European martial arts from a largely academic perspective. Interest in physically interpreting the texts was largely dormant during the post-war period however due to a number of factors, including limited access to the historical texts, distance and a lack of effective communication.

During the 1970s a number of important things happened that would spark the modern revival of Historical European Martial Arts. The spread of medievalist groups (living-history and re-enactment groups) played a role in spurring interest in researching and recreating medieval fighting methods.

In 1972, James Jackson published a book called Three Elizabethan Manuals of Fence. This work reprinted the works of George Silver, Giacomo di Grassi, and Vincentio Saviolo. In 1975, Martin Wierschin published a transcription of Sigmund Ringeck's Fechtbuch, along with a glossary of terms and a bibliography of German fencing manuals. In turn, this led to the publication of Hans-Peter Hils' seminal work on Johannes Liechtenauer in 1985.

Across the United States and Europe, small numbers of isolated researchers independently began researching Historical European Martial Arts in earnest. In the 1980s and 1990s, Patri J. Pugliese began making photocopies of historical treatises available to interested parties, greatly spurring on research. 1994 saw the rise of the Hammerterz Forum, a publication devoted entirely to the history of swordsmanship. Hammerterz Forum laid the foundations for a community of interest, and was the means by which many researchers came to know of one another's existence.

The Historical European Martial Art internet revolution also begun during the 1990s. Websites and E-mail lists began to appear on the web, as well as transcriptions and translations of some of the historical texts. During the late 1990s, translations and interpretations of historical sources began appearing in print, complementing the growing body of content available online. Finally, the appearance of various internet forums played a key role in creating a global sense of community among researchers and practitioners.

The number of Historical European Martial Arts schools and study groups continues to grow each year, as does the number of publications, translations and interpretive material.